The alarm bell rang with intense fury as the storm outside the ship’s cabin faded into silence.  The ocean waves bobbed the vessel up and down, and Robert’s great fear of drowning blended into nausea.  The crew was shouting outside, working effectively even without their captain.  Robert stepped over Captain Gathers’ sleeping body and peeked outside at the deck.  The horizon was swallowed by the immense titan of the sea, with its riders perched on top, preparing for battle.  It was larger than he had expected, for it was still growing toward them.  Surprised that it hadn’t arrived yet, he realized that it must be impossibly large.  Even its riders must be gigantic.

Robert was startled by 2 crew men suddenly outside on the deck, but they were distracted by the .50 caliber machine gun that they were bolting into place, facing the direction of their impending doom.  A titanic rumbling was growing louder, and no one could tell if it was the sound the creature made on purpose, or if it was the sound of the massive water displacement as it came toward them.  Regardless, men were having trouble fighting off their fear.  One man alone by the helm clutched at a picture of his wife and young child, born just before he left on this mission.  His last mission.  Tears blended with the sea spray as he pushed the throttle down further, trying to pull away from his fate.  The engine roared over the crashing of waves on the bow.

Robert still struggled to remember who he was, and how he got here.  Collapsing into a chair, he held his head in his hands and tried to fight off his nausea.  He felt a ring on his finger and looked at the gold glistening in the flickering light.  Married.  He grabbed a wet wallet from his hip pocket.  Photographs.  Children.  He saw one of his wife from their wedding day.  It was almost ruined from the water, but he could still see her eyes, and the way her black hair fell over her shoulder.  As if an invisible artist took great care to make sure she looked perfect.

“…Let me help you clean that up, breakfast is on the table.  I took today off so I could try to cheer you up…”

He snapped upright as a memory shot electric through his body.  Eggs, over easy.  Toast, perfectly tanned, lightly buttered.  Bacon, crisped to perfection. Coffee, black, with cream waiting to be used in a cute little cup with a tiny little handle.  It all was coming back to him now.  His unemployment, his depression.  The reason he used dreams to escape his life each morning with a new nap under an old oak.  The way the sun shone through the leaves that day, when he fell into some terrible reality.  To escape, he must dream.  But to truly dream, he must escape.  The strange old man!  The words he heard, urging calm, must have come from him!  Did he know how to truly escape?   To truly dream?

The .50 cal exploded from outside the cabin, and Robert was so startled that he fell back down.  He almost hit his head hard enough to be knocked out, but it just throbbed red hot in agonizing waves of pain.  He knew what he had to do.  He had to get back and save his wife from his copy.  The Dark One.  It ate the tanned toast that should be his, and had the wife that he should be with.  Rage bubbled inside of him as he imagined the malevolent smile looking at him from his own doorway as himself.  Robert stood and looked out the window, the gun chugging bullets as the boat bobbed up and down.  The leviathan was still growing larger now, consuming the entire horizon.

How could something ever be so big?

A sound came from behind Robert and before he could turn in time the Captain had his arm in a lock behind him and his face pressed up against the tiny circular pane of glass.

“You really fucked up now, bud.”

“Please, please knock me out!” Robert groaned out as his shoulder almost dislocated.  Tendons stretched and popped as Gathers squeezed Robert’s forearm higher up on his back.

“You don’t get out that easy, bud.  You cannot escape.”  Robert’s face paled as he saw the faint smile of a Cheshire reflected in the thin pane of glass his face was pushed against. 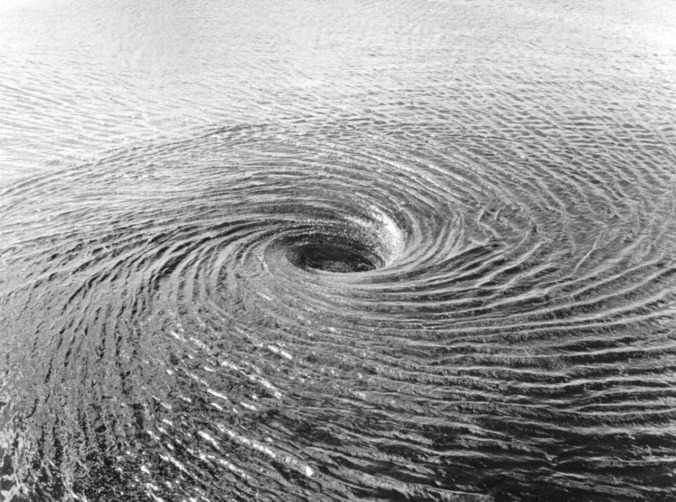 Robert struggled and slammed his head back into Gathers’ shifting face, and a half-human squeal erupted from it.  Whirling around to face his assailant, Robert saw shadows spiraling back into the ears, mouth, and eyes of Captain Gathers, who now stood before him.  He looked confused.

“Hey… You knocked me out!”  Robert breathed heavily and rubbed his left shoulder.  He saw his chance now.  Anyone else would have just thrown themselves overboard and let the sea take them, but Robert could not bear to face that fear.  Not yet.

“I’ll do it again if you give me the chance, boy.”  Robert straightened his back and put up his dukes.  He wanted to get the hell out of this reality before the sea creature swallowed him up whole along with the boat.  Gathers let out a huge laugh and gave Robert a straight kick to the chest, flinging him back into the bulkhead.  The wind was knocked out of him and he couldn’t stand up or resist.  Gathers picked up Robert by his shirt, and brought his feet up off the ground and slammed him back into the wall.

“I’m going to work you over, buddy.”  He sneered into Robert’s face as he raised a fist.  The .50 caliber erupted hot lead outside, startling the Captain.  He dropped Robert and looked outside, pressing his face against the glass.

“My God… I’ve killed us all.” Robert stood up behind him, and paused awkwardly.  Should he try to knock himself out?  He didn’t have to worry about it for too much longer, as the aquatic behemoth suddenly began to submerge itself just as it came upon the boat.  The men at first began to cheer, but then the sheer mass of the being going underwater created a massive maelstrom off the port bow.  The gaping maw of an ocean god pulled the boat in and as they went down the boat tipped onto its side, and the death screams of fishermen filled the rushing vortex of wind and water.  Filing cabinets tipped in the cabin, and the corner of one impaled the Captain against the door with a wet thud.

“I’m sorry… Eveline.. Junior… Forgive me…” Bubbled blood coughed from his mouth as he breathed his last.  A fire extinguisher caught Robert on the back of his head as he stared at the dead man who wanted a better life for his family.  Sympathy came easily as darkness filled his vision.  More darkness.  Infinite darkness.  Almost as black as his wife’s hair.